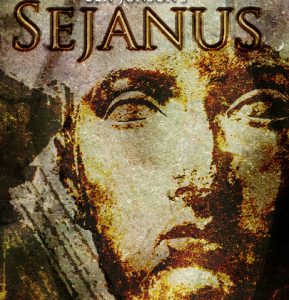 This work by Ben Johnson is rarely performed, and according to the theatre company presenting it to us, this may, in fact, be the first time it has been produced in the western hemisphere.

It takes us back to the days in Rome when Caesar Tiberius ruled.  And Sejanus, the principal of the story was one of his Praetorian Guards.  While he started off as an equestrian he rose to great power, until he got on the wrong side of the wrong people and was put to death in 31 AD.

The show is done in the pre-Shakespearian manner with an all male cast.  Kyle Crew is Tiberius, and Thom Gillott plays Sejanus.  Ty Autry does the drag numbers for Livia, the wife of Tiberius and Agrippina, a widow lady, as well as 2 other roles.  Brent Griffin, who directed this opus, also is on stage as the powerful Sertorius Macro.

The story is as confusing as anything set in ancient Rome may be.  But, on the other hand, it sort of rings a bell where we find the egocentric leaders bent on holding ultimate power.  And it made me think of an old French adage which says that the more things change, the more they stay the same.

Yes, we may have different laws, and we don’t send people into the Colosseum to be attacked by lions.  But, to this day we may impose harsh penalties upon those who fain would not do our bidding.

The show is staged without any set, as the play’s the thing.  The cast of ten players come and go with great ease and energy; and the music plays on by Matthew Trautwein as one of the inner circle.

The location is downtown across the street from Emory Hospital.  Park in the hospital garage and show them your ticket stub for a reduced rate.  Better than the parking ticket cockroaches feeding on you.  Much more info available at ResurgensTheatre.org