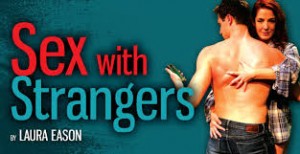 Sex with Strangers
Horizon Theatre
through May 1, 2016

Laura Eason created this work about some unlikely writers hooking up in a B&B retreat up north, and how their totally different lifestyles wound up transforming each other. It’s enjoyed playing around the country in many venues, and I wouldn’t be surprised if it got to the screen one of these days.

We meet Olivia Lago (Megan Hayes) and Ethan Kane (Michael Shenefelt) when he shows up uninvited, and intrudes upon Olivia’s working on her current manuscript. She’s quite reserved and a bit older than him. She’s been a writer for some time, puts in a lot of effort and has gained very little from her work.

Those of us who are writers generally understand that celebrity is what sells. When the author’s name is in larger type and above the title of book, you know he is getting paid quite well. But, for most of us, our royalties on published works may sometimes pay for lunch at the Waffle Palace.

Olivia wants the success status. Ethan wants to be able to be a human with an appropriate partner. He actually read her published book and thought she was brilliant, and he hunted her down to her retreat for the sole purpose of connecting with her. And connect they do. Will either achieve the type of success they may desire? Whether of not that is a relationship which can last is what you shall have to contemplate as they move through Act II.

Directed by Jeff Adler, on another fine set by Moriah & Isabel Curley-Clay, the show moves easily through several scenes. It’s an interesting work which pits the old hard copy readers against the cyber scanners. The viewers in their 20’s may “get it” even more than the AARP members. For more info and tickets: HorizonTheatre.com