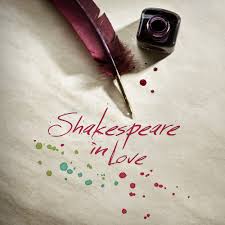 Shakespeare in Love
Alliance Theatre at Oglethorpe
through September 24, 2017

It’s been several years since the heart-breaking loss of the Georgia Shakespeare theatre at Oglethorpe University. So what a joy it is to have the Alliance Theatre bring this one to the stage, with Richard Garner directing, and many of the former cast members of the Shakespeare company.

This production has a large cast of two dozen players. Ok, maybe 23 and the dog “Spot” makes 24. But the play’s the thing and this one based on the film of the same name is a load of fun. Come back in time to London in the late 1500’s. A time when a woman was not allowed on the stage. And there were problems aplenty. For without a typewriter, Will had to take his quill and scribble out every line of a script. He’s just had some success with Two Gentlemen of Verona, but is under a lot of pressure to deliver up another script, and he’s dealing with writers’ block, big time.

Thomas Azar plays Will, and he goes for Viola, played by Bethany Anne Lind. But, nothing is easy. Viola has been promised by her dad to marry Lord Wessex (Joe Knezevich) but she’s not inclined to do so. And to start off, Will is getting some inspiration from Marlowe (Thomas Neal Antwon Ghant). You’ll also get a kick out of the Queen, played by Tinashe Kajese-Bolden. It seems that a play about Romeo and Ethel may not quite fill the bill. Then when the theatre gets shut down for violation of the rules against women on stage; what’s a playwright and performing company to do?

The costumes and set designs were by Angela Balogh Calin and work so well. The costumes are astoundingly great, especially her majesty’s get-up. And the fight scenes, choreographed by Scot J. Mann are superb.

The Conant Performing Arts Center is a first class theatre, at Oglethorpe University in Brookhaven. Free parking, a patio where you can picnic before the show, and every seat in the house has a perfect view of the stage. The show runs about 2.5 hours with an intermission, and it’s one you will want to see and won’t forget. More info and tickets at AllianceTheatre.com