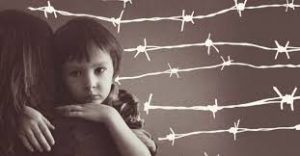 The Alliance Theatre is on the road this year as they renovate their facility at the Woodruff Center. This production is staged at Actor’s Express on West Marietta Street and easy to get to with plenty of adjacent parking.

The story is set in Philadelphia as the Nazi onslaught was starting in Europe. Leonard Kirsch (John Skelley) and his wife, Evelyn (Amanda Drinkall) have made a huge effort to save Jewish children, knowing they would be ripped from their families and sent to die. They’ve had many more applicants than they could accommodate, as they are limited to 50. Leonard has arranged for 50 visas to be issued through connections with the government; for the United States was not too interested in receiving a wave of immigrants. These were times when even a boatload of escapees were within sight of Miami and our government denied them access. Makes one truly believe that those who forget the past are doomed to repeat it.

They have 49 foster families lined up and need one more. So they invite in a couple who have their own relationship problems. Martin Bloom (Lee Osorio) is a successful man who is stoic and stand-offish. His wife, Roberta (Park Krausen) is more open. Evelyn and Leonard finally get the Blooms to agree to become foster parents, and then they leave for Vienna to gather up the children and bring them to safety.

It is there that they meet Frau Mueller, whose son has been selected as one to be saved, but she is concerned about sending him off, never to be seen again. This is where the story gets extremely difficult; especially for those of us who lived through that era. The images never die.

Alix Sobler created this play, and it is NOT derived from the films of similar titles. This production is directed by Kimberly Senior and is very well done with sets and apparel reminiscent of 1939 by Jack Magaw and Nan Zabriskie; and is on the open stage at Actors Express. It is one that is meaningful for adults but probably not for youngsters.
More info at AllianceTheatre.org