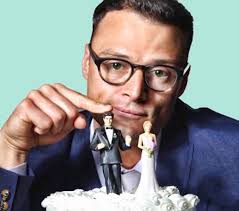 Significant Other
Actor’s Express
through June 19, 2016

This play is by Joshua Harmon, who wrote Bad Jews which Actor’s Express staged last year, and which has had a powerful run in NYC and elsewhere. Mr. Harmon writes about people who have idiosyncrasies and personality conflicts, and they are not autobiographical.

In this work the action centers around Jordan (Lee Osorio) who has been living with one woman and working with others who are all sort of BFFs; but one by one they drop off the list as they march down the aisle to take their vows. Diany Rodriguez, Brittany Inge, and Cara Mantella are at his back, but not so much in front, if you get the drift.

For Jordan has his eyes set upon a fellow worker. And grandma Helene (Judy Leavell) would just like the young man to find himself, get a wife, have some grand-kids and be a success. Not likely to happen.

Edward McCreary and Jeremy Aggers each take on three roles as the scenes shift in time from office, to apartment, to wedding receptions, to angst-ville.

Jessica Holt directed this busy-body show on a neat set by Shannon Robert; but many in the audience might have some problem rationalizing some of the quick moves through time and space. The show runs pretty long, and although the author has made some cuts, there may be some more tightening from which it could benefit.

This will play well to the AE’s audience, but isn’t for the kiddies, or Miss Prim. There’s no open sexuality but plenty of expletives and one smooch in act 2. The ladies present plenty of eye candy as they prep for their vows and get ready to take their bows. I didn’t think it as funny as Bad Jews, but it is one of those which clothes pathos in humor. Jordan just has to find himself, and let himself be what he is, not what others may wish him to be. Ergo, the plot thickens then boils over.