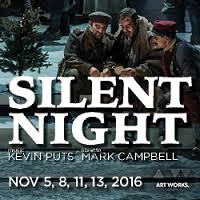 In this time of stress around the world, we have a chance to recall an unusual event during WWI when soldiers in the trenches called a truce for a night and celebrated Christmas without killing one another.  This opera with music by Kevin Puts is based upon some real events which took place on the Eastern Front in 1914, when 100,000 troops put their guns aside, met up in open spaces, and celebrated in union.  It was not without complaints from their superior officers and many were subjected to some penalties.

The story was made into the film Joyeux Noël  in 2005, and when this opera premiered in 2012 the composer was awarded a Pulitzer Prize, although to many of us the score is instantly forgettable.

The stage is set on a 3 tiers, where German, French and Scottish troops are entrenched.  It is sung in several languages, all of which are shown in the super-titles, so you can see what they are singing, even when in English.  As a scene at the front lines, the cast is all male except for one schöner machen, Ava Pine.

With what we’ve just endured with the election, as well as fears of terrorists attacking, and climate change and all that other angst being tossed at us on a daily basis, one might think this opera is timed just right to remind us that we’re all people; regardless of appearance, language, nationality, or any other aspect.  And if people can behave reasonably with one another, that life can be better for all.  Let us hope that our elected officials get this message.

The opera has two performances left at the Cobb Energy Performing Arts Cener, on November 11 and 13.  You can get more info and tickets at AtlantaOpera.org