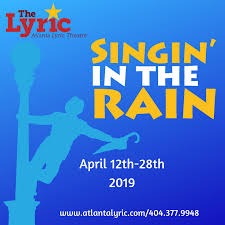 Singin’ in the Rain
Atlanta Lyric Theatre
through April 28, 2019

Singin’ in the Rain started as a film in 1952 with Gene Kelly, Donald O’Connor and Debbie Reynolds in the leads. It was set in the 1920’s when silent movies were starting to morph to “talkies.” While some of the folks in LaLa Land thought it would never really take off, The Jazz Singer proved that wrong.

Mary Nye Bennett directed this grand scale musical with a large cast, grand costumes and terrific song and dance numbers. R. F. Simpson (Bob Amaral) is the head honcho at Monumental Pictures, and they have started to shoot a silent film, The Dueling Cavalier, starring Don Lockwood (Jeremy Benton). As things go on, they get the idea that the show might sell better as The Dancing Cavalier. One problem is that Lina Lamont (Ruth Beyer) is the proposed star of the film, but she couldn’t carry a tune in a bucket. That’s when Kathy Seldon (Leigh Ellen Jones) gets brought on to do the voice-overs as Lina just lip synchs. Don’s buddy, Cosmo Brown (J. Koby Parker) helps to mediate a lot of the possible problems for the studio.

The fine cast brings about 15 numbers to stage, including standards such as Good Morning, and Singin’ in the Rain. The live band under the baton of Paul Tate does a great job as well, and the finale brings to stage a send-off akin to what was done on Broadway.

The Lyric is easy to get in Marietta, with plenty of free parking and comfy seats. More info at AtlantaLyric.com