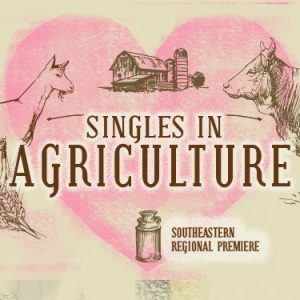 This is a regional premiere of a riotous show crafted by Abby Rosebrock, who may now be a New Yorker but she grew up in South Carolina and knows what some of the less urban folk can be like.

So in this comedy we meet Joel (Jeremy Aggers) who is attending the annual SIA (Singles in Agriculture) convention. He meets up with a hot chick named Priscilla (Lauren Boyd) who also is there on a solo mission. About the only thing that they both share is dealing with livestock. He has cows and she has goats. But, she has some other plans in mind when she visits Joel at his motel room.

They are both sort of observant Christians; albeit they see things through different lenses. She is ready, or more than ready, to seek comfort and enjoy some time with Joel. Joel, has a host of problems about dealing with the other sex. And, he’s not really street smart nor very understanding. These two main actors do a terrific job with a script that is not quite your usual boy-meets-girl type of play.

The show runs through several scenes in one act, and towards the end things get somewhat crazy whenthings erupt in such a manner that the security guard is called to the room. But, fear not. You’ll even enjoy the security guard, Lois (Vallea E. Woodbury). Justin Anderson directs this production in the smaller stage venue at Aurora, on a really good set by Trevor Carrier.

Easy to handle, good view from every seat in the house, and free parking. More info at AuroraTheatre.com I can assure you, it ain’t just about a bunch of good ole boys, and it ain’t quite what you might have expected.