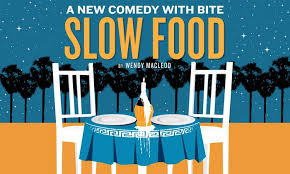 Opa! And welcome to a nice Greek bistro in Palm Springs where Irene (Marcie Millard) and Peter (Matthew Edwin Lewis) are celebrating their anniversary. The menu looks pretty good with some fresh spanakopita and really good lamb. There may be one slight problem, though.

That is the waiter, Stephen (Dan Triandiflou) who just seems to never finish whatever has been ordered or started; be it another Samuel Adams or even the house salad. We never actually meet the maitre de and chef, although at one point Irene responds when an accident happened in the kitchen.

This laugh fest is one of those where anything that could go wrong, does so. The couple is sooooo hungry that at one point Peter belts out that he’d even eat a braised kitten at that point, if the waiter couldn’t get their orders to them and quickly. With Irene’s suggestion he tries to be more accepting of Stephen and his goofy behavior; not thinking about Stephen’s attraction to him being indicative of a sexual preference.

The show, by Wendy Macleod, is directed by Ryan Oliveti on a beautiful set by Isabel and Moriah Curley-Clay. It runs about 90 minutes with no intermission. Theatrical Outfit is downtown on Luckie Street. You can park in the garage just north of the theatre and the box office can provide you with discounted packing passes. More info at TheatricalOutfit.org