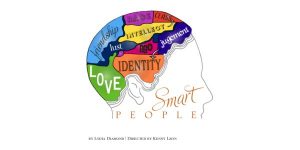 Lydia Diamond wrote this one about 4 folks in Boston area with advanced degrees from Harvard, as they explore facets of racial discrimination and pre-judgements. It premiered in Boston and then went to NYC where Kenny Leon directed. Now he has brought it to his home base and brought in David de Vries to direct this version.

The NYC show did not garner rave reviews, and some slight adaptations have been made for True Colors’ presentation. There are four characters, a white neuropsychiatrist (joe Knezevich), a black medical intern (Neal Ghant), a black wanna-be actress (Danielle Deadwyler) and an Asian-American professor of psychology (Ginny Yang).

The set designed by the Curley-Clay sisters starts off looking like a Rubik’s Cube. But, once the action starts it works easily with changing sets which slide in and out of various portals, and computer generated imagery which can go from one scene to another in the blink of an eye. The action takes place in a medical center, a classroom, an office, an apartment and various other venues.

It is not the location, nor even the IQ levels which really defines the play. It is designed to make one reflect upon pre-conceived characterizations, preferences and prejudices; whether found in the genes or in the jeans, whether taught or inherited.

The doctor is not happy as he feels he is not fairly treated because of his skin color. Are there different assessments of his skills for that reason? You tell me. In 2008, when Obama was running for office, and when this play is set; we know that some forms of discrimination persisted in employment as well as even in college admissions. Back in the 50’s the Ivy League schools such as Harvard had limits on admission of Jews, Catholics, Blacks and Hispanics. It took some serious work to get those limits eased.

The neuropsychiatrist wants to get on with some research relating to prejudices, yet he also has his own problems; especially trying to relate to students he considers to be not quite up to expected standards. The actress is going through the auditions routines, getting nowhere in a hurry and doing odd jobs to survive. She finally gets to New York, albeit isn’t Broadway or The Village. And the Asian-American lady goes through some acceptance difficulties, regardless that she sees herself not as Asian but as a practicing slut, with a PhD.

The bottom line is that the problem is not going to just go away in a matter of a few years. While a person may back away from some poor chap on the street dressed in rags, he/she thinks not what that person may be inside that body. For it is more important to judge a person by his/her character then to pre-judge their character by their ethnicity.

For many of us who have had plenty of diverse life experiences, seem to agree that when you know people of other cultures and backgrounds, the less likely you may be to want to kill them. Except for what’s been in the news these past weeks.