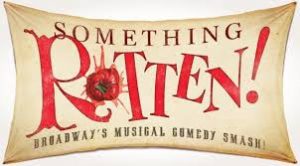 Something Rotten!
Fox Theatre
through April 22, 2018

Do you like musicals? Have you seen some of the works of The Bard? Do you get a kick out Mel Brooks films? How about some of best SNL sketches? Well, if any/all of the foregoing ring your chimes, then you have to see Something Rotten!

I can’t give away all of the schticks, or the puns; but alas, Something was rotten. Brothers Nick Bottom (Rob McClure) and Nigel (Josh Grisetti) are trying to eke out a living as writers and producers; but this is back in the 90’s. Oops . . . did I mention 1590’s? It was the times of the renaissance and was when the peasant stood up through the entire show, women could not take to the stage, and puritanical rules were being imposed. Not quite what we have today.

But, you’ll find Shakespeare (Adam Pascal) trying to do all the research and using as many investigative opportunities as possible to cobble together more shows. He gets into it face-to-face with the Bottom Brothers.

Shylock (Jeff Brooks) is pressing them for overdue payment, and they even seek advice from Nostradamus (Blake Hammond) as to what the future holds and how to achieve success.

There is a cast of 27 players, with live music, great costumes and great choreography. If you recall a lot of the standards from Broadway musicals, you may find it hilarious how the numbers in this work, relate to the oldies.

OK. I am not telling you any more, other than I attended this performance with no idea of what was to come, and it was a total delight. This is one you’ll see now and again when it comes back to town some day. For the play’s the thing and you can get more info at FoxTheatre.org