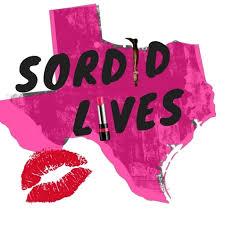 Sordid Lives
OutFront Theatre
through May 20, 2018

If you’ve seen some of Del Shore’s works, then you know he loves to set them with totally dysfunctional families in one-horse towns in Texas. This one is a bit different in that it does deal with homosexuality as it was regarded in them old days in them towns.

Jacob Demlow directs a cast of 12 players. The story is told as “chapters” rather than scenes, and Bitsy Mae (Abby Holland) opens each with her singing from stage left. Peggy (we don’t get to see her) has died after a tragic accident in an affair with G.W. (Bert Lyons). Lisa Boyd plays G.W.’s spouse, and Peggy’s sister, Sissy (Fracena Byrd), is trying to keep thing in order, which ain’t too easy to do. Peggy left a couple of daughters who seem to dance to different tunes. Latrelle (Britny Horton) and LaVonda (Brittani Minnieweather) are often at odds.

But there are odder situations. Ty (Jason-Jamal Ligon) thinks it would be good to get “Brother Boy “ (TK Habtemariam) out of the nut house that his family got him sent to some 20 years ago. The loony bin doctor (Jessica Maguire) has been getting nowhere with Brother Boy who is a cross dresser and homosexual. Wendy Melkonian, Jordan Ford, and Darrell D. Grant round out this cast of weirdos.

But there are laughs every minute of the show. After all, what would not be funny about a drag queen subjected to others trying to “cure” him, sisters and good old boys getting into it, and some of them gals getting them guys to strip down at gun point? I can’t tell you how Peggy died, but even that isn’t a usual type of happening.

This is one of those plays that maybe tries to put the word “fun” back in dysfunctional, as it applies to families. OutFront Theatre performs at 999 Brady Ave, just off 10th Street and west of 75-85. More info and directions at OutFrontTheatre.com