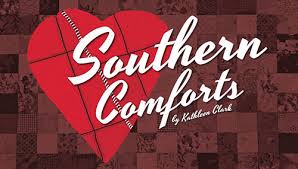 Southern Comforts is not about living in Dixie, nor is it always totally comfortable. Two senior citizens find one another and try to make the compromises that will enable them to forge a life as a couple. As in real life there are stresses and there also are some very funny scenes as well.

Karen Howell plays Amanda, a nice adult woman from some hick town in Tennessee. She is now up in New Jersey and calls on Gus Klingman, played by Rial Ellsworth, to hustle him for a donation to the church. Gus is a minimalist who makes Andy Rooney look like a wimp. And Amanda comes on to him with everything but corn pone and mountain moonshine.

Can they make it work? Will they make it work? What can either possibly see in the other? You have to watch it to find out. There’s not much action in the first act. It’s mostly just dialogue. Quite a bit more in Act II, but I can’t tell you how it occurs; just that it is funny.

She yaks away. He tries to tune out and turn off. Each is widowed and each has his own deeply set ways of life. The one thing they share is the loneliness of being alone. The emptiness of dining alone, or watching the ball game alone. And so it goes.

Part of it is like a film noir in the latter part of Act II. As one who has been there and understands too much what it is all about, I found it deeply penetrating. A good set by Chuck Welcome and well directed by Kate Donadio MacQueen.

This one is certainly for the 50+ crowd, and they are the main audience of this local Dunwoody theatre. I do recommend it for mature audiences. Not that there is blue language. Just that the kids wouldn’t relate to it. For times and tickets visit them at StageDoorPlayers.net