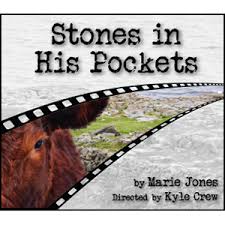 Stones in His Pockets
Arís Theatre
through May 22, 2016

Arís Theatre is the place to go to for good Celtic productions. They stage their works at GPB’s studios on 14th Street just west of 75-85. This work, by Belfast native Marie Jones, is a very different piece of work, and I should emphasize the word “work.”

Directed by Kyle Crew, there are but two actors onstage. Although they play more than a dozen roles, which requires that they not only know all the lines in the two acts; but quickly change sexual orientation, body language, accents and some slight adjustments to their costumes. A difficult task for those of us who are lucky to remember our postal addresses.

The plot takes us to County Kerry in the 1990’s where an American film company is working on a film where most of the townsfolk are being engaged as extras. The star of the film is a Yank named Caroline Giovanni, who is very into herself and assumes that every man wants her. So she has her security man, Jock, by her side. Things go awry at the end of Act I when they’re all at the Local and a townie, Sean, is attracted to Caroline; except she doesn’t have the same feelings and turns him away. And the lad does wind up as a problem when the Act comes to a close.

In the second Act, a problem comes into focus when the producers and directors of the film want to finish shooting that day, but a funeral is also that day and the dilemma is whether paying respects is more important for the locals than being on camera as an extra for ₤30. And there is some impact on Charlie (Matthew Welch) who is working on a script he wants to get produced, but lacks the contacts to get it green-lighted. Jake (RJ Allen) who is back from a stay in NYC is his friend and cohort and they try to move things along and find answers which will work for all concerned.

The two actors also play a teacher, a couple of assistant directors, some local chaps, the director and a grip. As with The Bard, all may not be clear at the outset but have faith that you’ll figure it out afore the curtain closes. Not much in the props and costumes department, but first-rate in story line and performance. For more info and tickets visit their website at ArísTheatre.org