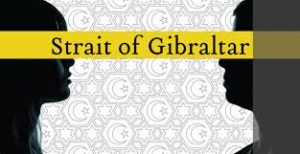 This is the world premiere of Andrea Lepico’s story of Miriam (Maggie Birgel), a New York Jewish woman who meets up and falls in love with Zameer (Benjamin Sims), who is Muslim and from Morocco.

Unknown to them, Zameer is on a watch list.  He’s overstayed his visa, and they both become persons of interest when Miriam agrees to open a bank account and deposit some money in it for Zameer so he can help get his sister to come to NYC.

The set by Elizabeth Jarrett looks somewhat stark at the opening, but it moves around with ease and the projected images by Amanda Sachtleben contribute greatly to setting the scenes as the story unfolds.

Directed by Rachel May, also featuring Kathleen Wattis, Suehyla El Attar and Brian Ashton Smith; this show is certainly not for the kiddies nor the faint of heart.  Anybody who has ever been persecuted and/or abused by a government will recoil at the action in Act II.  On the other hand, it is a story that needs to be told, for it relates to the world in which we currently live, and seem to be stuck with for some time to come.

Syncronicity performs at the Invesco Building at 1545 Peachtree Street and is easy to get to with on-street and garage parking available.  More info and tickets at SynchroTheatre.com