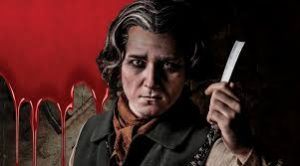 More than 150 years ago, a scary story was published in London in what was then called a penny dreadful. It was titled The String of Pearls; but it was about that demon barber on Fleet Street. It didn’t take long to hit the stage as it has been adapted many times and been playing around the world since 1865. Then along came the current version by Stephen Sondheim, based on book by Hugh Wheeler. It won almost all the Tonys when it came on stage in 1979.

You have seen the play and/or the film and know the basic story. It’s about that barber who got sent down to Australia by some corrupt judge, and years later shows up in London Town seeking revenge in a somewhat bloody way.

Barber Sweeney Todd (Michael Mayes) hooks up with Mrs. Lovett, who is a lousy baker trying to eke out a living by making and selling her awful pasties. She was using road kill as a filler, until Sweeney figures out a much heartier source. Mrs. Lovett is sung by Maria Zifchak, and she and Sweeney make quite a pair. But wait. . . . you’ll also enjoy Leah Partridge as the nut-case beggar woman. She’s a hoot.

The tale involves a young sailor (Joseph Lattanzi) who falls for Johanna (Vanessa Becerra) who turns out to be the daughter of Sweeney, who has been raised in very tight circumstances by the judge who sent Sweeney away. The judge (Tom Fox) has the hots for his foster daughter and would wed her, would she be willing to do so. Ugh…. And he is supported by a colorful Beadle (Timothy Culver) who is a civil servant guard. The other three principals are Adolfo Pirelli (Christopher Bozeka) and his assistant Tobias Ragg (Ian McEuen) who also winds up working for the pie lady. Matt McCubbin doubles as the loony Jonas Fogg who runs an asylum.

However that is not the entire cast. They are joined by a company of many more players who are the street people and help to move the story along. This is a huge presentation for the Atlanta Opera. The sets alone must have taken some great work to move into the theatre. They are backed up by a full orchestra in the pit, and the costuming is great as well.

There are two numbers which will ring a bell, and they are Not While I’m Around (also referred to often as Nothing’s gonna hurt you . . .) sung to Mrs. Lovett by Tobias, and Pretty Women sung by Sweeney and the judge. If you expect to see a lot of blood and corpses, please know that is not the case. It is part of the story, but it isn’t thrust at you in a manner to revolt you. What this is, is an excellent and highly professional production of a contemporary classic work directed by Albert Sherman, with the orchestra under the baton of Timothy Myers.

If you like musical theatre and/or opera in English; then this is a must see; so go visit their website where you can reserve your seats and enjoy the show. They perform at Cobb Energy Center and full info is at AtlantaOpera.org