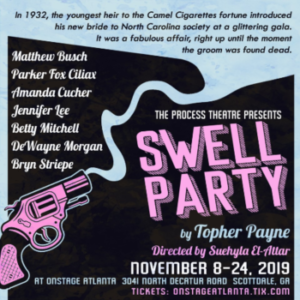 Playwright Topher Payne is one of those who can read about an event and see it through different eyes. In this case he goes back to the Reynolds family estate in Winston-Salem in 1932, when a family member may have committed suicide. But then, maybe not; but he was found dead. In real life nobody to these days can state with certainty what actually happened; even if they had read the transcript. Oops . . . different mystery case still pending.

Suehyla El-Attar directs a cast of players, many of whole leave stage and return in flashbacks which could get a little confusing for some of us who can’t recall our phone numbers or names. Betty Mitchell plays the head of the household, Kate Reynolds, and she has a go-fer, Babe (Bryn Striepe) who is quite a number; often behaving as if she were family not an employee. Each actor is in a stereotype role.

The sage churns around the young aviator, Smith, a/k/a Smitty Reynolds (Parker Fox Ciliax). Smitty is smitten with flying, albeit he isn’t always quite certain where he may find himself landing. He becomes enamored of an aspiring actor, Libby (Amanda Cucher) who he quickly weds even though she isn’t quite the Reynolds’ type. Libby has a coach who is a gypsy-like weirdo, Blanche (Jennifer Lee), and Blanche may know some things, or suspect them, but seems to be a gossip monger.

The estate manager is Albert a/k/a Ab (Matthew Busch) and he has some concerns as to what he’s doing and where he’s heading, while serving his days doing his mistress’ wishes. And before the rest of the constabulary invade the premises to go over the crime scene and remove the body, the investigator and family friend, Mr. McMichael (DeWayne Morgan) is trying to get some facts down in writing as well as on an old style recorder. Too bad Alexa wasn’t there . . .

This is not the typical riotous Topher Payne opus. Yes, there are plenty of one-liners, and some comedy rising from tragedy, as you sit there asking yourself who did what, when and how. And, as your own family members might tell you; you are entitled to your own opinion, . . . but you’re wrong.

The production by the Process Theatre is performed at OnStage Atlanta. It is well done, and maybe a little over done, time-wise as it runs almost 2.5 hours. Mor info is at OnStageAtlanta.com