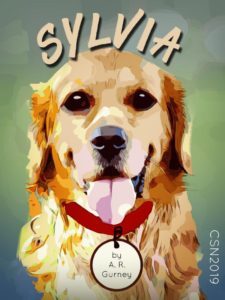 A. R. Gurney’s Sylvia hit the stage about 25 years ago and has been pleasing audiences ever since. For many of us it comes off more as a reflection of real life, than as a really camped up comedy.

Meet Greg (Ned Thurman) who is a businessman in a situation which is not exactly what he wants at work; and he and his wife are now empty nesters and moved from the burbs into Manhattan.

His wife, Kate (Julie Forbes Resh) has landed some work as a teacher. The last thing she needs in her life and her marriage is some mutt that Greg picked up while he was goofing off at the park. They are 180 degrees apart on the adoption idea, but the more time Greg spends with the dog, the more enamored of the dog he becomes.

What is really cute is that there is no real canine in the show. Jessie Kuipers plays the adopted Sylvia. Greg didn’t name her that; she had a name tag on when she came to Greg that day; ergo the bitch knew who and what she was and what she wished for.

The story deals with the stresses the dog injects into the marriage. And, in one scene Kate goes to a counselor for help. LeeAnna Lambert plays three supporting roles. She is Tom, a guy Greg gets to know at the park, where Tom’s dog gets into it with Greg’s. Then she comes on a a visitor, Phyllis, who cuts her visit short due to some canine concerns. And she winds up as the shrink, Leslie, who tries to mediate Kate and Greg’s relationship problems after Kate had scored a 6-month assignment in London.

There was no way the three of them could go because of the 6-month quarantine rules in the UK. A decision is finally made to find another adopting family. But, whether or not that works out you have to see for yourself.

Amy Cain directed the show, on a very workable set. And you will wonder where Jessie Kuipers gets all that strength and agility. It’s a load of fun; even if you don’t have a dog. Think of your neighbor’s dog, and what his life is like. Or recall the famous line when a hotel manager tells Clouseau, “That is not my dog.” For that is where Kate starts off.