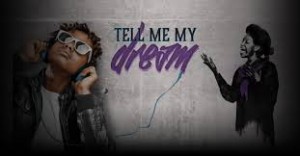 Tell Me My Dream

Pearl Cleage is the Playwright in Residence for the Alliance, and a brilliant woman with an amazing grasp of life changing situations. This is a new play she wrote, thinking that it would be mainly for middle-schoolers. I would respectfully beg to disagree with her on that. For, it is one which folks from 10 to 90 will equally enjoy.

She uses a time warp to permit a couple of bored teens, to journey back from today to Atlanta in 1910. Jeremiah Parker Hobbs and Stephen Ruffin play these two school buddies who would rather watch or play sports then study history. They have leave their smart phones and other junk behind and they hit the road with a young girl named Mary, played by Isake Akanke.

The way in which the show runs is unique and wonderful. The two school guys are actually in the audience watching a play and not knowing they are going to be in the play. We meet another young man, Henry (Avery Sharpe) who thinks he wants to get out of town and move north to enrich his life. Remember we’re now back in 1910, just four years after some terrible race riots here in Atlanta.

Henry’s mom is played by Vallea E. Woodbury, and the Rev. James Solomon (Mary’s grand-dad) is Daviorr Snipes. Rosemary Newcott, who manages young audiences for the Alliance directed this play; and she must have loved doing so. It is a one-act work which runs about an hour long. But, when it ends, you wish it didn’t have to.

Many of us here in Atlanta are ex-patriot Yanks, and didn’t grow up having to deal with the segregation and discrimination which did not evaporate with the passing of the 14th Amendment. We may have read about some of it, but didn’t have to live with it.

Pearl’s work draws upon the history of what happened here when the Metropolitan Opera came to town and colored people were barred from attending. For it was Henry Hugh Proctor who founded the Atlanta Colored Music Festival of 1910 which continues to this day, albeit the name is now Atlanta Music Festival.

This is a signature work which evolves from the concept that music can bring us all together as opposed to separating us. Just look at what goes on in NOLA. (That’s New Orleans, for those of y’all who don’t know no better.) For times and tickets visit AllianceTheatre.org