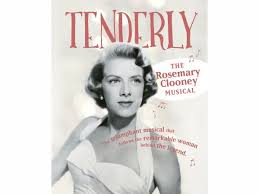 Come back some years with us as we delve into the life and times of Rosemary Clooney. She had a tumultuous life. Born in Kentucky into a dysfunctional family, which went through a marital separation which included some children being ripped apart from one another. She started singing when she was very young, but she didn’t come into the limelight until 1946 when at age 18 she was featured on a record with Tony Pastor’s band. And the story goes on from that point.

Her first big hit was Come On-a My House with Mitch Miller. She wound up being seen and heard on just about every radio and TV show, and was a very attractive woman to have at stage center doing her numbers. Her personal life was a roller coaster, with two marriages, 5 children, and a terrible drug addiction.

When we meet her in this play she is with Dr. Monke, a shrink at a hospital she was a big benefactor to. And the good doctor is played by Mark Cabus, who comes on in loads of different personae and certainly seems to be enjoying each of them. Rachel Sorsa is stupendous as Rosemary, as she takes on the time-travel trip of her life, including her attraction to, and appreciation of, some folks such as Bing Crosby, Frank Sinatra and Robert F. Kennedy. It was being present at his assassination that year (1968) that puts her over the wall and gets her in the psych ward.

Once she fought off her innermost devils, she came back to stage and performed when possible until her passing in 2002 at age 74. Many more years than one might have thought possible.

In this production Rachel moves the story along with many of Rosemary’s classic numbers, which anybody with an AARP card will recall and want to sing along. There is a three man band upstage and everybody is in place and on tune with the action at all times. Directed by James Donadio, it’s a VERY enjoyable evening celebrating the life of a fine performer who had won several lifetime achievement awards.