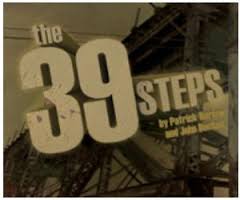 This camped up version of The 39 Steps is a laugh a minute. Once there was a novel written 100 years ago by John Buchan, which was adapted into a famous 1935 film by Alfred Hitchcock. And the more current play is crafted for only four actors, doing dozens of roles with incredibly fast costume changes and using different voices and accents.

In this version you meet Richard Hannay (Jacob York) a bloke who has a posh flat in London. A strange but beautiful woman named Annabella (Stephanie Friedman) intrudes upon his privacy when she says she’s being pursued by a couple of men with intent to do her harm. Those two men, as well as many other men and women are played by Tony Larkin and John Markowski, and they are a riot.

In this production director George Contini has included two “ushers” (Ryan Stillings and Jillian Walzer) who mostly move props and provide some off-stage lines when a carnival scene is in progress. You may have seen The 39 Steps on stage before, but not quite like this one. Whereas Hitchcock treated the story line as a mystery thriller, this modern adaptation is more akin to The Three Stooges meet Alfred Hitchcock.

What if some gal gets murdered in the Hannay’s flat in London, or if a vicious spy has a finger missing, or that most of the characters may not be quite what they seem to be at the outset? This is one trail of laughter as it wends its way from Mr. Hanney’s flat in London all the way up to Scotland where the hapless visitor strives to save the UK from a disaster. Not sure what disaster, but it must be complicated, inasmuch as it consists of 39 steps.

Tired of politicians mouthing off or TV shows with people getting killed? Time for a good laugh? For more info go to StageDoorPlayers.net