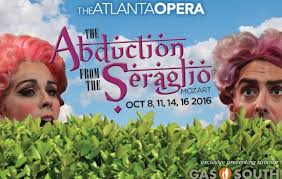 The Abduction from the Seraglio
Atlanta Opera

Mozart’s work must have been a really exotic sort of thing for opera fans in his days. He did derive this one from his ideas of what a Pasha’s life may have been like, and how women were treated in the harems of their palaces.

Originally in German, this version is sung both in German and partly in English, and the story line, as in many operas, doesn’t really run the show. It’s about music, voices, costumes and sets; and the set used by the Opera is quite unique in that it seems to be a picture frame with some projected images, but also some stage area where principals come and go.

Belmonte (Ben Bliss) shows up at the palace looking for his lady, Konstanze (Sarah Coburn) who was captured by some pirates and sold off to the Pasha along with her maid, Blonde (Katrina Galka) who were now owned by the ego-centric Trump-like Pasha Selim (Tom Key), who has become enamored of Konstanze although his affection is not reciprocated, even under duress imposed by the Pasha.

The Pasha’s security honcho is Osmin (Kevin Burdette) who kind of knows that something is afoot; he’s not sure what, but he denies entrance to Belmonte, and is watching his turf. Belmonte hooks up with an old servant of his, Pedrillo (Matthew Grills) who has some privileges as head gardener for the palace, with easy entry and exit therefrom.

The die is cast. Pedrillo and Belmonte decide to plan an escape from the palace with the two gals, and to head home to Europe. First problem is Osmin, but Pedrillo comes up with a scheme that might work. And part of the escape scene is sort of like Abbott and Costello.

The foursome doesn’t get away with it and faces tortuous deaths at the hand of the Pasha. But, fate works wonders. It seems the Pasha was victimized by a relative of Belmonte’s, and he gets the idea that one should not fight evil with evil, and all comes round in the end.

With stage direction by Chris Alexander and the orchestra under the baton of Arthur Fagan, it was a superb production, and one that is a true credit to our opera company and artistic director Tomer Zvulun.

Next up with the Atlanta Opera will be Silent Night, which is about the Christmas eve during WWI when there was a one-day truce by combatants who decided to celebrate together rather than shoot one another; even though their actions were not authorized nor approved. The production opens November 5, at Cobb Energy Performing Arts Center. For more info visit AtlantaOpera.org