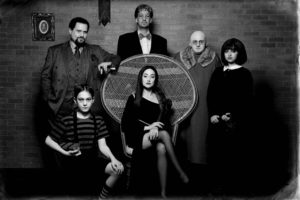 The appropriately named Lyric Theatre has brought another first class musical to the stage in Marietta. The Addams family is not your usual Norman Rockwell clan. But in some ways they could be more like your own family.

Directed by Ricardo Aponte, the cast of 16 players weave their way through the turmoil in the Addams family when the daughter, Wednesday (Golbanoo Satayesh), falls for a more “normal” young man, Lucas (Russell Alexander), who is not of the same ethnic background; and neither of the families are familiar with one another. So Wednesday figures that a reception party would be a good mixer for everybody.

Lucas’ parents (Tony Sandrew and Jillian Melko) get freaked out by some of the freaks, and Wednesday’s parents, Gomez (Luis Hernandez) and Morticia (Deborah Bowman) also have similar problems vis-a-vis the “normals”. Some other weird stuff comes from Uncle Fester (Shane Murphy), who has fallen deeply in love as well, and Lurch (Skylar Brown) who has a little communication difficulty. The other living members of the Addams clan include young Puglsey (Jacob Sherman) and Grandma Addams (Kayce Grogan-Wallace).

With really good sets and costumes, and music managed by Paul Tate, the cast works their way through 25 numbers, including some with really good dances choreographed by Kari Twyman. The play moves along effortlessly as you peer into the lives that you hope don’t mirror your own. But, that’s life; is it not?

A really fine production at the Lyric, with free parking, good view from all seats, and easy to get to. Covid protocols are in place so bring your cards and masks. More info and tickets at AtlanticLyric.com