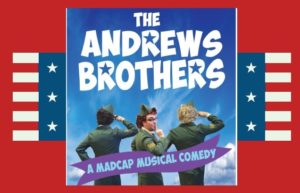 Are you tired of watching politicians, doctors, and little vials on a conveyor belt? Then get your buns over to the Marietta Theatre Company which is just off the Square and is set up like a cabaret venue. And that does include beverages and treats if you have been good, . . . or whatever.

A cast of 4 players bring down the house with the songs, dance, comedy and certainly the costumes. You go back in time to an island in the South Pacific where a touring group for the USO is going to stage a send off for a navy unit. It’s March 1945 and the war is still going on. The Andrews Sisters are the act to hit the stage; except they get quarantined and can’t make the gig.

That’s when a wanna-be-star named Peggy Jones (Leah Keelan or Brandy Bell on different dates) shows up to be the opening act for Patty, LaVerne and Maxene. She’s a real poster girl who wants her photo on the inside of ever guy’s locker; ala Rosie the Riveter. The brothers (Sully Brown), Max (Jeff Cooper) and Lawrence (John Jenkins) decide to grab a chance to get in the spotlight so they will take the stage as The Andrews Sisters.

The show is a non-stop musical and you will recall some of the numbers such as I Wanna Be Loved, Shoo-Shoo Baby, and of course the Boogie Woogie Bugle Boy. Each of the performers is doing a totally engaging and entertaining job; and they all work the house in a small venue like this one. They sing and dance their way through more than 20 numbers under the direction of Claudio Pestana. Harris Wheeler is on the board for the music and Leah Boresow Groover choreographed the great steps.

So, accentuate the positive and check them out online where you will get info and tickets easily. Website is at MariettaTheatre.com