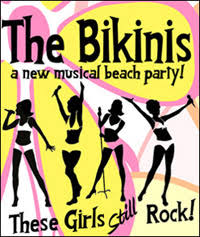 Even if you’re too young to remember all those hits of the 60’s and the flower children, you have heard about those Itsy Bitsy Yellow Polka Dot Bikinis. And this new musical is about the group of four young women who became The Bikinis.

They sang at weddings, bar mitzvahs, proms and even under the boardwalk. The show was written by Ray Roderick and James Hindman with more than 30 musical arrangements by Joe Baker. It is an evening of pure enjoyment where nobody is killed and no political orations are presented.

It is a story about four gals who live in or near Sandy Shores Trailer Park which is being yuppified and renamed the Sandy Shores Mobile Home Beach Resort. And just as in real life, a developer has made an offer buy up all the land rights and build some new condos. Sounds like everyday business in south Florida. The residents have to vote and a majority vote wins. But they are split like the Senate on this one. 183 on each side. These four a performing a show for the residents trying to save the park.

Meet Annie (Aretta Baumgartner), Karla (Wendy Bennett), Jodi (Adena Brumer) and Barbara (Janelle Lannan. Karen Beyer directed and also fashioned the choreography. The revue is presented with plenty of comedy and some terrific costume changes. I assure you that you’ve not seen these kinds of swimsuits before.