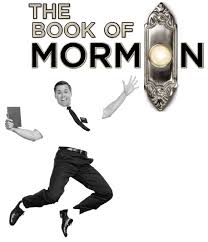 The Book of Mormon

They’re back and going strong. . . . The Book of Mormon opened 5 years ago on Broadway and has generated more heat and press than most shows could wish for. Mainly because of its no-holds-barred satirical attack on the proselytizing activities of the Church of Jesus Christ of Latter-day Saints. When it played here two years ago it sold out daily.

Trey Parker and Matt Stone, who brought us South Park, were brought up in Colorado area, and had a lot of interaction with the LDS church. They hooked up with Robert Lopez and the three of them crafted this winner. It won nine Tony Awards the first year it played, and the album won a Grammy. No wonder so many albums sold. If you talk to anybody who has seen the show, they won’t be able to recall a single number if they don’t have the album. The music and dance is terrific, as well as unique, but you’ll lose some of the lyrics.

This is the one of the few shows in which the eye candy dance troupe is all male. They’re the 10 young men. “Elders” who are sent out to Uganda to bring some of the natives into the faith. The time is set during the days of Idi Amin, albeit he is not included in the script. But, abuse, murders, and every other problem is present for the folks in the rural community.

Ryan Bondy and Cody Jamison Strand play the two Elders who are sent out from Salt Lake City to join forces with the others who are already there and getting nowhere in a hurry. It isn’t quite what they had dreamed of when they were in training. These two play off each other for much of the humor, and they sing and dance as well. The female lead is Candace Quarrels who plays the young Nabulungi; the girl whose name Elder Cunningham can never get right.

This is a production that is world-class. Sets and costumes couldn’t be better and some of them remind me of Lion King. It moves with ease through many scenes and never lacks in ear and eye appeal. Having said all that, there are two other things you need to know, if you have not already been clued in.

First is that tickets are very hard to find. You can go online or to the box office, but understand that you may not be able to easily score exactly what you want. And this is NOT for Ms. Prim, or the Bible Thumpers. There are enough expletives to impress even a teenager, and plenty of single entendres. If you are one who is easily offended then this might rub you the wrong way. The upside is that while G-d may not be initially respected by the natives, that the essence of the satire is not the religious beliefs, per se, but the sales promotion thereof.