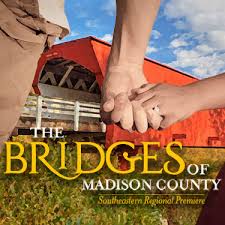 The Bridges of Madison County
Aurora Theatre
through April 16, 2017

The production at the Aurora Theatre is the musical version from a 1995 film about a housewife in a rural town who has a brief fling with a visiting photographer.  The musical adaptation hit the boards in NYC in 2014 and closed after only 3 months.  The next year it went on tour, which lasted 7 months.  And this is the Southeastern Regional Premiere of the musical.

Francesca (Kristin Markiton) is a housewife in Iowa.  She is from Italy, where she met Bud (Matt Lewis), and became his war bride.  But after 18 years she really understood that small town Iowa was a lot different than old Napoli.  They had two children, Carolyn (Hannah Church) who had an older brother, Michael (Benjamin Davis) and they each had their own teenager concerns and desires.

Bud is off to a 4-H Club Fair with the kids;  and Carolyn’s steer, when a photographer shows up in town to take shots of the bridges there for National Geographic.  He’s done six bridges and knows there should be a 7th, but can’t find it.  He stops in at Francesca’s home to ask directions and the story takes off.  Robert (Travis Smith) and Francesca each get the hots for the other, and since they are both alone, why not have a glass or two, or dinner, or whatever . . .?

Bud seems to call home fairly often, and Francesca just plays along.  But she also is aware that Marge (Valerie Payton) is a Nosy Parker type who can see Robert’s truck when he is at Francesca’s home, and has binoculars that can help her peer into the house and surroundings.  Rob Cleveland plays Marge’s hubby, Charlie.  He gets the last 2 words in every discussion with her.  “Yes Dear”

As the story goes on, Robert and Francesca fall deeply in love;  albeit each knows it isn’t going to work out so well.  Bud and kids come home, and chaos starts to rain upon them all when they’re on the street and they see Robert nearby.  Francesca has to decide if her love of family surpasses her love for Robert, and she does make a decision.   Then as the show moves to a close, she has her memories of her daughter’s wedding, her son’s graduation from college, and the funerals of Bud and Charlie.  All is gone for her, except for one more memory which comes back at the bridge which started it all.

Directed by Justin Anderson, on a pretty unusual set by Julie Allardice Ray, the cast of more than a dozen players sing and dance their way through the story backed by the 8-player off-stage band directed by Ann-Carol Pence.  This is not for youngsters at all, and there are two bedroom scenes in it.  And, you may know the story if you saw the film.  You can get more info and tickets at AuroraTheatre.com