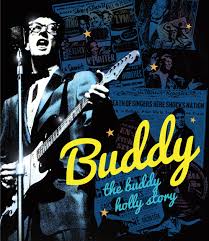 This was one of Robert Farley’s favorite shows, last produced at GET in 2010 and now onstage again in his memory.

Buddy Holly was one of the first white guys to break into Rock & Roll back in the 50’s He came out of a Lubbock, Texas to skyrocket to fame in a brief and tragic career. Buddy was one who may have left us at age 23, but when you look at what he did, you know that at least he lived life before he died. No cultural barriers would stop this young performer. He played at the Apollo in Harlem in the days when honkys weren’t generally found there. He met Maria Elana Santiago (Andrea Mora) who was from Puerto Rico and quickly married the lovely woman. He wrote and played his music the way he heard it, rather than the way the producers might have preferred.

His final concert was in the Surf Ballroom in Clear Lake, Iowa in 1959. After the concert he and his friends, Ritchie Valens, and J.T. Richardson a/k/a The Big Bopper took off in a chartered Cessna bound for Fargo, North Dakota. The plane crashed just a few miles after take-off and that was the day the music died.

Jeremy Aggers is great as Buddy. Ricardo Aponte, who directed this show also brings the house down as Ritchie Valens, and Ethan Ray Parker makes the walls shake as The Big Bopper. They are backed up by a great cast and a wonderful band. The sets are right on, and in the second act the show plays to the audience as if you were actually sitting in on the final performance in Clear Lake.

There are very few times when you will see a show that exudes such energy and provides so much great fun. Don’t sweat it if the first act seems a bit quiet. You ain’t seen nothin’ yet. Even if you don’t recall the days the girls wore poodle skirts and the boys all thought they were Fonzi, you shall not be disappointed in any respect. More info at GET.org