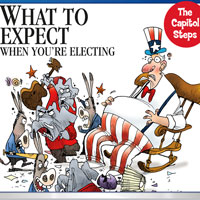 One of the most timely and hilarious troupes ever to hit the boards, as well as being on the air with their contemporary musical commentaries, has done Atlanta the honor of performing once more at GSU’s Rialto Theatre.

And you KNOW that with all the political hogwash being spewed out at us 24/7, that they had no shortage of themes. Just consider the titles to a few of the numbers, such as The Leader is a Trump, Leader of the PAC and If There Were No Rich Men.

The current cast of this group has actually worked in DC in the offices of 11 Senators and 7 Representatives. As they say, most of whom have since been defeated or placed under investigation. Gee, . . . as the French would opine, “the more things change the more they stay the same.” And you know how to tell when a politician is lying. His lips are moving.

They’re not all bad, but they are great fodder for comedians. So few have the guts, or the ability, that Michelle and Barack have to go live into a schtick with Stephen Colbert.

You can check out The Capitol Steps on utube or listen to some of their numbers and have a good laugh. And when they next come to town, you know you MUST get tickets.

Next up at The Rialto will be a great dramatic dance company, Vertigo, which will be a one-nighter on October 22nd. More info and more upcoming special events are easy to research at Rialto.GSU.edu