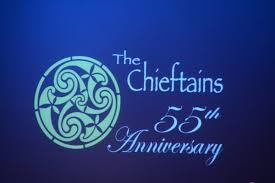 With St.  Patty’s Day soon upon us, what a treat ’twas to see Paddy Moloney and The Chieftains on their 55th Anniversary Tour.  For they’re selling out in every stop they make, and leaving every person in every audience in a state of pure elation.

’Tis not often you get a show with a strong cultural group of seven players who also present some of the best step dancing, almost as if Michael Flatley were doing his thing with them.  And in addition to their own members, they also brought on stage a group of young ladies from a local chorus who did a couple of numbers, as well as some local kilted pipers who did their thing as well.  The musicians and singers were all top-notch, and all you wanted to do was raise a glass and yell Slainte as well as plead for another encore.  It was a delight to all.

And, on the subject of Celtic entertainment, know that Celtic Woman will be at Cobb Energy Center on Sunday, March 12th; then on March 17 and 18 the ASO is in concert with Cherish the Ladies.  So let’s all enjoy the holiday with whatever comes our way, and not from a politician at play.