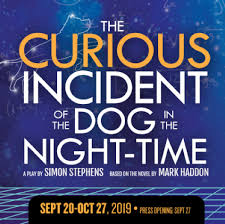 The Curious Incident of the Dog in the Night-Time
Horizon Theatre
through October 27, 2019

This is a most unusual play, being produced and staged in a joint effort by Horizon and Aurora Theatres. It will play here through October then open in Lawrenceville early next year. It is so clever when two theater companies collaborate in such a fashion, as it saves quite a bit of production costs, and reaches out to disparate audiences.

Playwright Simon Stephens based this work on a book by Mark Haddon, about a young man and his family dealing with his autism. Despite the title of the work, this is probably not for children, nor those who are diagnosed as autistic; for it is filed over the top with stress, angst, emotional breakdowns and yelling.

Lisa Adler and Justin Anderson got together to direct this incredibly energized cast of eight players. The set, by the sisters Curley-Clay is not the usual you might have expected for a school, home, neighborhood, train station, etc. But, with many portals and some really good projected imagery, it works quite well; as the Bard would observe, the play’s the thing.

Brandon Michael Mayes exudes more power than most actors would wish to deliver, as Christopher, the son of Ed, a working man, (Christopher Hampton), whose spouse is no longer in residence. Where she is, and how she is, is part of the story which develops over several years.

The tale is set in Swindon, which is about an hour by train from London. So just know they speak a bit as if they might have been East Enders. Candy McLellan, Megan Dominy, Lala Cochran, Jimi Kocina, Brian Kurlander and Yvonne Miranda Singh hit the stage as many characters as the tale progresses.

This one won 5 Tonys and 7 Oliver awards, and is one you’ll not forget too soon. Horizon is in Little 5 Points, easy to fight your way to through traffic (allow some extra time) and with plenty of parking, goodies, and good seating. More info at HorizonTheatre.com