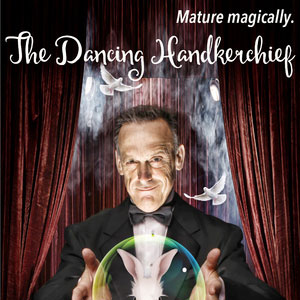 The play is quite a bit different than others you’ve seen.  Geoff Sobelle and Adam Koplan penned this story which Adam has adapted to a staged performance, with music and lyrics by Robert Lopez.

Tom Key comes on as Mysterioso the Magician.  He got some help from Joe Turner, a really good local magician who has played around town.  And Tom comes off looking the part and dealing out a few illusions which are basics from Eddie’s Trick Shop, if you are into that stuff.

The play is being staged in association with The Flying Carpet Theatre Company of New York.  It is a story about a magician and his daughter, who don’t see things the same way and they part ways; only to reunite with the passing of one of them and reflection of experiences and lessons learned along the path called life.

The story is moved along mainly by Deborah Bowman, who as the adult daughter, Bastienne, delivers up 9 solo numbers, backed up by S. Renee Clark on piano and Ramon Pooser on bass, Jeremy Aggers on guitar, and Lorenzo Sanford on the drums.   Aggers also doubles in some supporting roles.

The younger Bastienne is played really well by Devon Hales who pulls off being a puppet master, with back help from Spencer Stephens, and some pretty agile moves along the way.

Whether this is one that “has legs” as we say, remains to be determined.  It isn’t a puppet show, per se, nor is it a magic show.  It is a show in which the principal characters play such roles.   While a lot of young folks might not get the true gist of the story, there may be a lot of senior citizens in the same camp.

But, directed by Adam Koplan, it is well staged and performed with total dedication.  The show runs about an hour and a quarter without intermission.  More info and tickets at TheatricalOutfit.org