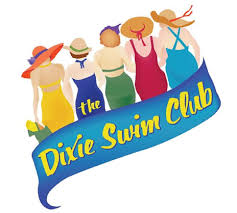 Three playwrights, Jessie Jones, Nicholas Hope and Jamie Wooten came together to craft a load of comedies and they have done so under the pseudonym of Jones Hope Wooten. OnStage presented their Savannah Sipping Society this past April, and now has staged The Dixie Swim Club to provide even more laughter.

We meet five gals who have stuck together as BBFs since their school days and being in the swim club. They come together for a week every August at a cottage on the Outer Banks of North Carolina. Each of the five has her own “stuff” to deal with.

There is one egocentric vamp played by Phyllis H. Giller, who has certain priorities in life. A hard working lawyer who hopes to find her big win one of these days, is played by Lateefah D. Mosley. Vernadette (Lory Cox) is one of those gals for whom anything which could go wrong does; and Bobbie Elzey was Sheree, the swim club’s tea captain who figures she still is in charge. Then they have a fifth gal who became a nun, but left the convent to become a mom. Jeri Neal is played by Cat Roche.

If the show reminds one of Only a Bridesmaid, or some episode of Golden Girls, it’s because these playwrights crafted those as well as many other works; and if there is one thing they know how to do, it is to evoke the humor in every day lives.

Directed by Cathe Hall Payne, the story takes place over more than 30 years as these ladies meet up in 1982, then 1987 and in Act 2 we find them gracefully aging in 1992 and 2015. Well, gracefully may not be the adjective they would endorse. This is a chick show to be sure, but the guys in the audience were guffawing as loudly as the ladies and enjoying every minute of the show. It is pretty poignant inasmuch as one of their reunions is thwarted by a storm. Thankfully, not like Irma.

If you would prefer good times and good humor over politicians and news channels, then my suggestion would be to turn off the boob tube and grab seats for this one. Easy to get to, free parking, nice coffee bar, and who could ask for more? For more info and tickets visit their website at OnstageAtlanta.com