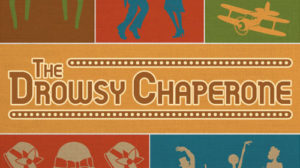 This is one not to be missed. Take your vaccination card and mask and head off to the theatre for a really fun and insane time.

The setting for the show is a theatre fan (Jamie Grayson) who adores musicals and he recalls a 1928 musical comedy called The Drowsy Chaperone. He goes through his collection of old LPs and finds the album which he puts on to play. And as it plays he is transported into the play itself as the characters seem to appear right in his apartment.

The plot is inane, but makes little difference. Janet (Meg Young) is a celebrated showgirl who wants to quit the stage to marry millionaire Robert (Michael Persson) and she just doesn’t want to show off any more. But, right out of a typical Mel Brooks kind of scene we meet the show producer, Feldzieg (Jono Davis) who has a load of dough invested which he borrowed from the mob. Jay Alexander and Matthew Blum are the gangsters who have invaded the wedding plans and are disguised as pastry chefs. Emeril they are not. So what’s a producer to do?

He hires an egotistic idiotic Latin womanizer to woo Janet and disrupt the wedding plans. Greg Hunter plays Aldolpho. One problem after another arises. Aldolpho woos the wrong woman, and Robert winds up kissing a French gal while he had eye blinders on and never figured out that the Frenchie was actually Janet. Oops! One more thing which could go wrong does so.

The show is a one act production, although the theatre fan does let the audience know as the first LP ends, that this would be an intermission if there were to be one. And, just to make things more insane as he puts on the second LP, it is the wrong show with an entirely different theme. The Chaperone (Kayce Grogam-Wallace) was to keep the bride and the groom apart until they met at the altar. This was during prohibition and it seems that some of the liquids she drank seemed to make her a little sleepy.

The cast of 16 players does a wonderful job, and the finale is just a hoot. I can’t tell you how it works out. Back in 2006 it won the Tony for Best Book of a Musical and also for Best Original Score. It also won for Best Musical as well as 9 other Tonys.

The show moves along without intermission for 110 minutes, under the direction of Spencer G. Stephens belting out 11 numbers with great singing and moving choreography by David Rossetti.
The show may not get grabbed so much by the youngsters, but those of us with some more years really enjoyed it. Please know that Covid protocols are being observed in Cobb County and this facility. But, it is for everybody’s safety. Easy to get to south of Marietta Square, free parking and really good view from every seat in the house. More info and tickets found at AtlantaLyricTheatre.com