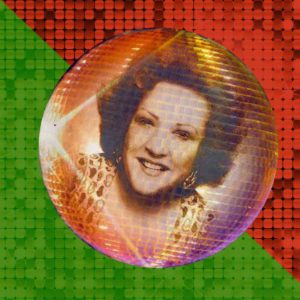 A couple of years ago, Paul Conroy delved deeply into the personal and performing history of Ethel Merman. He wrote and directs this play and Nick Silvestri managed the musical arrangements of many oldies that Ethel sings on stage.

Ethel Merman, nee Zimmerman, is performed to the hilt by Lynn Grace. Ethel is confronted on many issues by producer/director Isaac Aherns (Rial Ellsworth) and they don’t see things the same way. Ever. Ethel is stage center for this broadcast in front of a live audience. She plays the house in every way. People who knew her might say she wasn’t the nicest of women. She was a potty-mouth, somewhat racist, and totally egocentric. Maybe she could have run for office.

In her show she brings on some very high level guests. Davin Allen Grindstaff comes on as Andy Warhol and he is quite an odd chap. But, not quite a odd as Truman Capote (Brandon Deen). And for extra energy she deals with Michael Jackson played by Patrick Coleman. Donna Summer (Alaina Holeman) is supposed to be doing her own numbers, but there’s a clash of egos every time. And Russell Scott plays Jimmy, the assistant and go-fer for Mr. Aherns and Ethel.

The show has a cast of thirteen players, six of whom are doing some great dance numbers and the disco costumes might bring you back to the days of your youth in some clubs where you bought a beer even though you were under age. The costumes are terrific, and the play comes off as quite a bit different than one with a red nosed reindeer or somebody yelling Bah!

Out Front is downtown off tenth street. Easy to get to despite the crazy traffic and valet parking available. More info at OutFrontTheatre.com