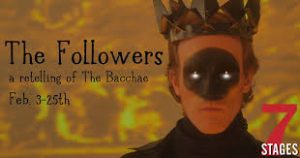 While Euripides was in exile and not happy with the political scene in ancient Greece, he wrote The Bacchae, which is a gripping tale of intrigue, revenge, and societal norms.

Presented on the back stage the show runs about 90 minutes in one act.

Dionysus (Ofir Nahari) has come back to Thebes in disguise to spread his own brand of beliefs. He’s not happy with King Pentheus of Thebes (Lowrey Brown) is not happy with most things, especially the tales of his birth by Semele (Laura Reboulet) who was victimized by the god Zeus.

Dionysus tries to convince the townsfolk that the road to salvation is by cross-dressing, and the fight is on with King Pentheus, and Dionysus winds up in the fire pit having been ripped apart, and only his head remains. The followers turn into animals and rage through the town.

The story is a bit confusing unless you had read Cliff’s Notes in high school, but the show is well done. It is directed by Michael Haverty and Margaret Baldwin, who is the author of the work. Klimchak composed the score for the play and handles it on his percussion array, and it works quite well.

7 Stages is in Little Five Points. Be sure to park legally, so you don’t get booted. And if you can show up early you can enjoy some truly great Mediterranean cuisine at Ali Baba which is next door to them.