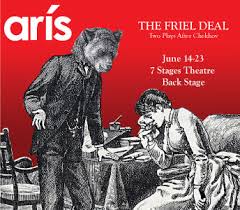 Brian Friel was an accomplished Irish playwright who was deeply into the works of Anton Chekhov. Chekhov wrote quite a few works about families, problems, and dealing with life in the old days in mother Russia. Friel took several of Chekhov’s stories and adapted them to having taken place in Ireland. He became known as the Irish Chekhov.

Aris has brought two of his one-act works to the back stage at 7 Stages in Little Five Points. The Bear, is not really about an animal, but about a ruffian who shows up at the estate of a grieving widow whose life was to be one of dressing in black and confining herself to her home. Erin Greenway plays Elena Ivanova Popova, and she is very withheld from visiting strangers, who knew her late spouse from days in the service. She wants her man-servant, Luka (Christ Schulz) to get rid of this “animal”, but that doesn’t work so well. The intruder, Gregory Stepanovitch Smirnov (Tamil Periasamy) is taking quite a liking to this woman, and things start to go down a slippery slope to find the end. It’s a lot of stress, directed by Kathleen McManus; but all comes right at the end.

In the second work, The Yalta Game, directed by Tim McDonough, we meet an attractive lady, Anna Sergeyevna (Christina Leidel) who is taking a break in Yalta while her husband is having some medical issues back in Moscow. She is a lady with a lap dog, and they catch the eye of an accountant from Moscow who is a philanderer playing his emotional cards at the resort. The interaction twixt the two really heats up, but where can it go? You have to try to figure it out for yourself as it plays out.

A sparse set, enhanced by very good actors, makes this 90 minute offering quite unusual, different and entertaining. It is on the black box stage at 7 Stages, and every seat has unobstructed view. Good concessions and you can bring your stuff into the theatre if you wish. More info at ArisTheatre.org