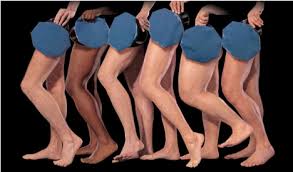 The Full Monty is one of those shows which plays on some sexuality being used to promote something really good. While the term “full Monty” comes from some UK slang for the whole lot; it may not be as titillating in some ways as Calendar Girls, albeit they both grab one’s attention big time.

Alan Kilpatrick directs a cast of more than two dozen players, while Brandt Blocker conducts a full orchestra in the pit. The play is derived from a film of the same name released in 1997 and the play hit the boards 16 years ago and is still playing somewhere any day.

We meet up with six guys in some steel mill town who are jobless. One of them was the boss of some of the others, but that doesn’t make much difference. They are each having problems. One of them is divorced and facing inability to see his son. Another has a wife who doesn’t even know he is not working when he leaves home each day. They are each looking for some way to make a few bucks.

Then they come across a strip club where a group like The Chippendales are performing to a sold out crowd of gals. Why can’t they do something like that? Well, there may be some problems. One of the guys is pretty chubby, another may be a poster boy for Afro-American manhood, and a couple of them may have landed lousy jobs at a mall or elsewhere, and they aren’t exactly Gene Kellys.

Well they do manage to get it together and book a one-night gig at the strip club. Then things start to go awry and it seems one of them has walked off the set. So what are they to do when the house is sold out, and if they cancel they are in big trouble with Tony, the boss of the joint.

So the show must go on, and it does, and in the final act they go for the Full Monty as they strip out of their police costumes except for their hats, which seem to cover some tracks. There aren’t any really memorable numbers in the score, as this is one of those where the stage action is the play and the play’s the thingie.

It isn’t really for the kiddies, but the adults and the AARP crowd truly enjoy this opus. Just promise that if you attend you shall not try to run up on stage and join the fun. Just sit there and applaud. More info and times at AtlantaLyric.com