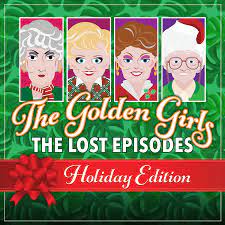 The Golden Girls
The Lost Episodes
OutFront Theatre
through December 19, 2021

If you are a fan of The Golden Girls, then this is a must-see. Adapted with permission from the TV series producers by David Cerda, the show has brought riotous laughter to everyone who attends. It is not for kiddies, nor for the few who may be upset by the use of the occasional expletive.

The show runs in three acts. At the opening, you are watching a real full screen projection of the old Christmas TV episode. You’ve seen it one or more times before but it doesn’t go stale with age. Then there are two acts which are the present day live performers doing their schticks as the four roomies. Blake Fountain plays Dorothy while Andi Stanesic plays the idiot Rose. Dorothy (a/k/a Pussy Cat) has to deal with her mother, Sofia, played by Robert Hindsman, and the slut, Blanche, is played to the hilt by Precious Anika West.

Michael Bartkiewicz directs the two live acts which are on a set that looks very much like the living room the Golden Girls shared in Miami. But, like most comedies, not much comes out right as things move along and the humor that spews forth is such a delight in these days of boring same-old same-old news day to day.

OutFront is downtown near 10th Street and there are parking facilities nearby; but we suggest you try to get there early to get closer to the theatre. The seating is good and every seat has a fine view. Serious Covid protocols are observed, so make sure to bring your photo ID, CDC card, and masks, which must be worn at all times in the facility. More info and tickets at OutFrontTheatre.com