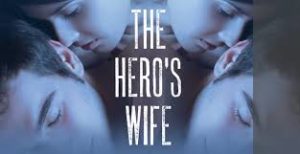 The Hero’s Wife
Synchronicity Theatre
through May 5, 2019

This is a World Premiere of Aline Lathrop’s newest play, presented here and at 16th Street Theatre in Chicago.

The play is a one act journey into the living hell of dealing with PTSD. Rachel May directed the two actors in this excruciating trip into the wars that never end. Joe Sykes plays Cameron, a former Navy Seal who is never going to be what he was prior to his deployments.

He is now “retired” albeit you may suspect he had been in some covert ops. And, his behavior makes you diagnose him as with PTSD from the first few minutes. And, while some people may recover from much of the symptoms, there really is no cure for it.

When he is awake, he is in love with his wife, Karyssa, played to the hilt by Rebecca Robles. But, when he is somnolent or fully asleep, he is someplace else and on his guard. He is always overly concerned about being a victim, although it is usually Karyssa, when he strikes at her when awaked, or goes wild in other circumstances.

The fight scenes when they are abed and he goes after her, may make you want to run onstage and hit him with a bat; were you not a patron watching a very difficult scenario play out in front of you.

If you know people with severe post traumatic stress disorder, this may be very difficult for you to sit through. It certainly is not for Ms. Prim or the kiddies. It deals with a terrible problem that too many of us have been dealing with at some point in our lives; and when you’ve been through such terrible situations there is no way you can ever permanently erase the images from your mind.

The actors give it their all, and the show plays through May 5th at their venue in the Invesco Building on Peachtree Street midtown. More info at SynchroTheatre.com