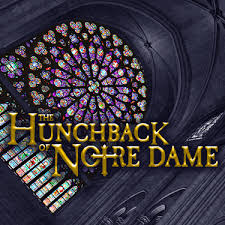 The Hunchback of Notre Dame
Aurora Theatre
through August 27, 2017

This is the musical version of the Hunchback, based on Victor Hugo’s classic tale, and with the music from the Disney film. Directed by Justin Anderson with a cast of more than two dozen players, on a superb set by Shannon Robert, the show tells the story of the young lad with the hump on his back being cooped up in a bell tower by a nasty relative who is a clergyman.

The lad is named Quasimodo suggesting he is only part human. He’s played to the hilt by Haden Rider. The Archdeacon Frollo is David de Vries. As you know, there is a gypsy lass, Esmeralda (Julissa Sabino), who is being badly treated;  as those who are of gypsy, or Romani heritage, are thought to be base criminals and they are sought after to be excluded from Parisian society. And Esmeralda has feelings for the hunchback, who turns out to be more humane than most of the other folks in many ways.

The other two leads are Kevin Harry as Clopin Trouillefou and Lowrey Brown as Captain Phoebus. The band of 9 players off-stage are under the baton of Ann-Carol Pence, and they are all spot-on as they run through more than 30 numbers in this Broadway quality production. I wish I could tell you that all comes out nicely in the end, but you probably know the story from your school days.

One aspect of this show is to bring out how those who are in political control don’t always make the best decisions. And it brings to mind the saying of George Santayana who opined that “Those who cannot remember the past are condemned to repeat it.”

It is also really good to learn that this is another co-production so that two houses can merge talents and funds to bring such good productions to local audiences. The Aurora is in Lawrenceville; and this show will travel into downtown Atlanta opening on September 7th as part of the Theatrical Outfit’s year, but staged at The Rialto Center for the Arts.

More info and tickets easily found at AuroraTheatre.com This one is a solid ten on the proverbial scale.