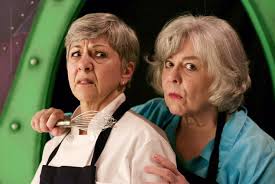 The Kitchen Witches
Out of Box Theatre
through May 21, 2016

Caroline Smith wrote this one about a couple of supposedly adult women who get involved in a TV program, and how things evolve in the process.

Directed by Jeffrey Bigger, the scenes take place on a neat set designed by Wally Hinds. When the show starts we meet a chef named Babcha. While that may mean Grandma in Polish, she isn’t quite there yet; as her son, Stephen (Dylan Parker Singletary), is the director for the show and is single. Of course, as a typical yenta, Babcha wants to hook him up and keeps trying to do so.

Babcha is played to the hilt by Betty Mitchell. She has this persona which may have some secrets she’d prefer not to publicize. But, as life would happen, Isobel (Pat Bell) shows up. Izzy was a classmate and former BFF, but some things have happened in their lives and a certain amount of rough ground has to be covered to get through to renewing a good relationship.

We’re treated as if we were sitting in on an actual production, with Ryan LaMotte moving the camera around, and the director holding up the Applause sign at appropriate times, and the two lady chefs dealing out their recipes for food, and some other things, as they go through the show.

Did I tell you the show was about to be canceled, and the interaction twixt Izzy and Babcha is what saves it and improves it’s ratings? Personally, I would give it a good rating; as it is a lot more fun than watching politicians selling their wares to the unwary among us.

The show may not have always won great critical acclaim in some venues, but it does have an underlying message that emerges in Act II, and this production is spot-on. It’s one the audience will really eat up. Pun intended. More info and tickets at OutOfBoxTheatre.com