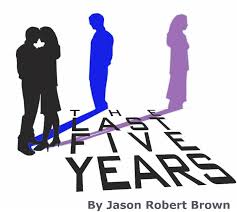 The newly formed Marietta Theatre Company performs at the Lyric Studio on the Square in Marietta. It’s a black box theater, but comfortable seats with good views, and they are really working hard to present enjoyable shows.

This show written and composed by Jason Robert Brown is basically a two person operetta staged cabaret style. It tells the story of Cathy (Stephanie Earle) and Jamie (J D Meyers) and their five years as a married couple. As most couples will agree that being together is not always every day of pleasure, it has to be that the glue bonding a couple surpasses the grit driving them apart.

Cathy is an actor trying to get recognized so her career may advance. It isn’t easy;  as in any of the cultural arts it is the few percent at the top who control more than 90% of the market, and celebrity is the promotional tool.

Cathy tells her story from the break-up time going back to the meet-up days; while Jamie tells his from days of wishing to find the right woman to the relationship and then the break-up. For, while Cathy is trying to be wife and actor, Jamie gets his manuscript accepted by a noted publisher and his street creds as a writer start to skyrocket. It is then that he and his trademark become of most importance.

There was a suggestion that the playwright fashioned a lot of the story line from his own life. But, notwithstanding that possibility; it is a truly unique offering under the direction of Zac Phelps, and it is a story that we all can easily understand.  It is not all pathos, as there is humor as well. But, humans are still human beings and we all have to try to accept that.

The performing duo have great pipes and they are backed up by a five-piece band of players under direction of Laura Gamble on the keys. It is a well staged unusual work for the adults, and easy to get to with street parking nearby.

You can get more info and tickets at their website, MariettaTheatre.com