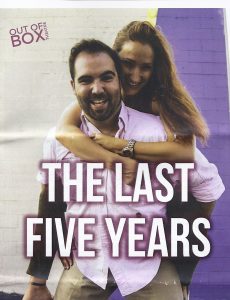 The Last Five Years
Out of Box Theatre
through July 23, 2016

This is a story of a relationship between two creative folks of different values and skills, and how it evolves over a five year period of time. It is performed in an operetta style with the two characters singing all their lines, other than one short speech by the man.

Jamie Wellerstein is a writer and fighting his way up the ladder. It’s not easy reading all the rejection letters. I know. He meets up with Cathy Hiatt, an aspiring actress when they are both in Ohio. But, Ohio is not for novelists and would-be stars of stage and film.

Cathy has her own rejection phenomena to deal with as she auditions for parts, up against those gals who look younger and have bigger boobs. You know the role that the casting couch supposedly played.

Jamie has to return to NYC to follow his career, and the action moves there for a while. Jamie (Stephen DeVillers) is a Jewish guy and Cathy (Lauren Rosenzweig) is Gentile girl, a/k/a a Shiksa in Yiddish. And the story alludes to some rejection possibility by Jamie’s family. But, we don’t really get into that much other than the one musical number, Shiksa Goddess.

The music is provided by three musicians on stage under the direction of Annie Cook on the keyboard. Melissa Simmons brought the show together and directed it. This one hit the boards around 2002 in NYC but ran only for a couple of months. It has been staged in many small houses in this country and overseas. But, it’s not a score that you’re going to run out an buy a CD of for your car. And, some times it seems as if the music is competing with the vocalists as opposed to supporting them. So they wind up screaming molto voce.

The cast and company do a really full power job of presenting this work, and you have to salute them for their efforts. More info and tickets at OutofBoxTheatre.com