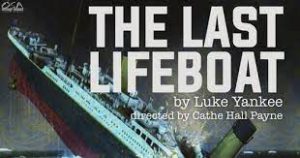 This is one incredible production of a deeply researched show by Luke Yankee. Yes; we all know that the Titanic went down after running into an iceberg, and the telegraph officer did his best to get out the SOS messages. Maybe we didn’t realize that about 1,500 people went down with the ship; albeit the CEO of the company survived.

And there is the heart of the story. The common saying is that the Captain goes down with the ship; and even that isn’t always true. Directed by Cathe Hall Payne with a very energized cast, we meet up with Thomas Ismay (Barry N. West) who is the head honcho of the White Star ship line in Liverpool. He is pushing his son, Bruce (Joshua Williams), to take over operations and to build the greatest cruise ship ever. That’s where you start to dive into the saga from the first minutes.

The cost of the venture becomes a problem and the financier, J.P.Morgan wants to force some cost control. Ergo the ship leaves port with only 16 life boats, not the more than 30 that might have saved all. When the ship goes down and Bruce winds up in New York, he is detained by the American investigators, even though the Royal Merchant Ship Titanic was under the Brit flag and the problem occurred in international waters.

William Randolph Hearst also played into the tragedy to help sell more copies of his newspapers, and like any sorry event, there were some folks who tried to profit from it. Sad to say that when Mr. Ismay got back to the UK, he tried to do all the right things to make amends and for 25 years lived in agony.

This is like looking at a picture and seeing through it, to what it really is. The set works easily, and there are dozens of scene changes that effortlessly take place. It is a true Broadway quality production in a local playhouse. Don’t miss this one. More info and tickets at OnstageAtlanta.com