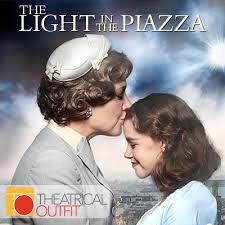 The Light in the Piazza
Theatrical Outfit
through May 15, 2016

The Light in the Piazza with music and lyrics by Adam Guettel is one of those works which takes real cajones to stage. And that is what Theatrical Outfit is all about these days. . . .

The story is fairly simple. A mother and daughter from North Carolina go off to Italy on a trip. We meet then in Firenze where the David is being checked out by tourists. The daughter is developmentally delayed after an equestrian accident. But, she does seem to be enjoying her visit to the Uffizi Museum and the other attractions. Most attractive to her is a young man she meets on the Piazza. Fabrizio (Tim Quartier) and Clara (Devon Hales) seem to hit it off big time; notwithstanding that her Italian and his English are both somewhat lacking.

This isn’t going to work, says her mother Margaret (Christy Baggett), who is concerned that Clara’s mental capacities may not be as hoped for predicated upon her age. But, what is driving the relationship may not be IQ tests as much as basic human relationship desires. As mother pulls Clara away from Fabrizio and drags her north to Rome, things get more stressful.

And we have two families that have concerns. Fabrizio’s parents aren’t nuts about him marrying a non-Catholic American gal, and Clara’s parents aren’t enthused about her relocating to Italy with a bunch of gumbas. Each has a concern that our Brit friends would refer to as NQOT (Not Quite Our Type). And where the story goes, is what the play is made of.

And this is one that is not your usual musical. The score is somewhat operatic and sometimes dissonant, while the lyrics are sometimes sung in Italian without any super-titles for those who no comprendere italiano. It’s not one where you’ll leave the theatre humming any of the music, nor recalling the lyrics.

Having said that, it is a very well produced show under the direction of Richard Garner, who brought in a fine cast of more than a dozen players, and put together an easy set with few props but which changes nicely with projected imagery.

The underlying question is, does love conquer all? You can get plenty of background info if you Google the show, and you can get more info and tickets at TheatricalOutfit.org