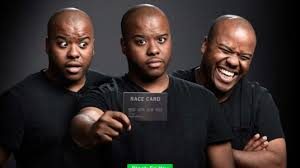 Mark Kendall wrote this one-man show which he performs with great gusto on the Hertz Stage.  In The Magic Negro and other Blackity Blackness, as told by an African-American Man, who also happens to be Black; he runs through a series of schticks akin to the kind of things you may have seen him do at Dad’s Garage.

He works the house to a great extent, and the underlying theme of the show is, of course, racial prejudice and how it may exist in our days.  Isabel and Moriah Curley-Clay designed a terrific set for him which works to help move each scene; and the image projections by Rasean Davonte Johnson, are just great.

There’s not a lot of inappropriate language other than some occasional s**t, but some ultra prims might not dig the essence of the segments.  Albeit most of the audience is a bunch of honkeys, they all just loved the show, and felt that it was an enlightening form of entertainment; especially in these days of our weird political situations.

It runs about 75 minutes, so easy to get to and you can grab a bite before or after.  More info and tickets at AlianceTheatre.org