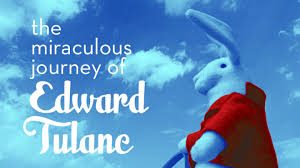 The Miraculous Journey of Edward Tulane
Synchonicity Theatre
through February 25, 2018

Kate DiCamillo wrote the childrens’ book which won several awards, and the play was adapted from her work by Dwayne Hartford. It has been used in many schools to address the issues of love, hope, dealing with disasters, and family issues.

Edward Tulane is a china rabbit doll that a caring grand-mother (Caitlin Josephine Hargraves) gives to her young grand-daughter, Abiline (Jimmica Collins) who absolutely adores the rabbit, speaks to it, sleeps with it, and is totally attached to the doll who they name Edward Tulane.

The show has a cast of only 4 players, with the other two being Josh Brook who is in several roles, and Justin Walker who is the onstage voice-over for Edward. What happens is that the rabbit doll winds up going through several tough times, such as being tossed overboard at sea, being in a dump, forced to be a puppet, and having his head broken and being sold by a doll store owner.

As he goes through life, he seeks to find a reason to exist, and that is what the story may be about. There is some lightly handled pathos as well as plenty of laughs, such as when Jammica comes on as a dog who wants to hang onto Edward. Makes you want to bark.

Mira Hirsch directed this really well done production in the theatre located in the Inverness Building in on Peachtree Street in midtown. Only one caveat is that it might be difficult for a youngster who has recently lost a family member or close friend. More info available at SynchroTheatre.com