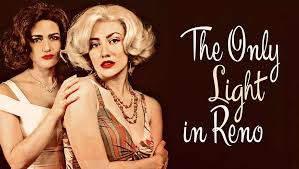 The Only Light in Reno
Out of Box Theatre
through August 26, 2017

Topher Payne obviously did a load of research into what went on fifty-six years ago when a film “The Misfits” was being shot in Reno and got shut down due to a huge forest fire.

The show is based upon some stories involving Montgomery Clift (Daniel Carter Brown), Marilyn Monroe (Bryn Striepe), Libby Holman (Jennifer Lee) Liz Taylor (Emily Sams) and Paula Strasberg (Carolyn Choe). The story line is somewhat obscured in the start but it deals with the personal habits and egotistical indulgences of these celebrities who may appear somewhat sane on screen, or in the media, but have troubles running their own lives.

It starts off with just Libby Holman, Marilyn and Monty dishing it out; but then Liz shows up and they start dishing the dirt about her and Eddie Fisher. That’s when things really get amped up. In the meantime there is Paula Strasberg, wife of the famed Lee Strasberg, who is trying to retain some semblance of sanity among these celebrities.

Directed by Matthew Busch, who had been connected to this work since it premiered 3 years ago. The set by Matthew and Topher Payne is Marilyn’s suite in the Reno hotel; which had a few problems such as no electricity, phones, or food service and the elevators trapping some guests, etc.

Bryn Striepe does a great job as Norma Jean Baker, whose Marilyn persona flew to the stars but flamed out at age 36. And Monty cashed out at 46. They all had their addictions and egos to deal with. So what else is new? Each member of the cast is spot-on and does a swell job with loads of lines, and the show runs about 2 hours 25 minutes with a 15 minute intermission.

I’m not sure the under 40 crowd is going to relate to a some of the history.   It is accurate and the author poured his all into crafting this one. It’s good to see that it’s been tweaked slightly, and has found it’s legs and will play around for quite a while. For as they know, the show, or the film, goes on as long as there’s a stage, or camera, and somebody who needs be in the lead.