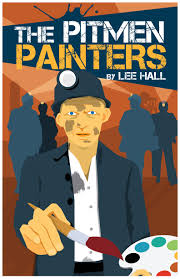 A book by William Feaver told the story of a group of miners in the Newcastle area of the UK, who had become a tiny art colony themselves. And Lee Hall adapted the true story into this captivating play. These are just average common blokes who work in the pits, as the coal mines were referred to. For a pittance they toiled under ground in 12 hour shifts. It was 1933 and the economy of the UK wasn’t so great.

A workers education authority had the idea that even these chaps might be taught to appreciate and understand the arts; and they formed a local class with a tutor brought in who opened their eyes, ears, hearts and minds to a world they never knew nor thought of.

The Ashington Group, as it was known, existed from 1934 to 1984, and kept at it, even during the war years when losses were deep. Adam Koplan directs this cast of stellar performers.   Sam R. Ross comes on as the wanna-be professor. And the soon to be artists are played to the hilt by Andrew Benator, Allan Edwards, Richard Garner, Clifton Guterman and Brian Kurlander. One neat aspect is that they are all speaking in Geordie accents, which was how the local folks spoke up there, and many still do today.

Tess Malis Kincaid appears as Lady Sutherland, who provides a lot of motivation in her desires to enhance her collection of works; and Caitlin Josephine Hargraves provides a different type of motivation as she is ready to model in a manner these pitmen hadn’t anticipated.

In real life, as in this play, these men delve deeply into themselves and wind up creating works that actually went to an exhibition in London and was well received. Although when things started out they were all totally clueless as to famous artists, genres, etc.

The show runs about 2 hours 30 minutes, and you don’t want to miss one minute of this one. It is a real treat and you can get more info at TheatricalOutfit.org